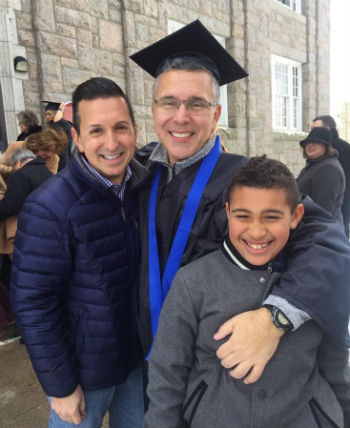 Arthur with his partner, Robert, and son, Ashton, at graduation

Arthur Taylor spent nearly 25 years as production manager of a manufacturing plant before he lost his job in the 2008 financial crisis.

"For the first time in my adult life, I found myself unemployed," he said. "I was 41 years old. I decided that I needed to look at going into a field where I would always have a job, where it would be a permanent sort of role."

So, Taylor followed in his mother's footsteps.

"My mom worked in the healthcare field," he said. "She always told me, 'Go into healthcare. Become a nurse. You'd be terrific.' But, I kind of pooh-poohed the idea. Then, I came full circle. My mom passed away two years before I lost my job. I said, 'You know what? I think I'm going to look at nursing."

Taylor has never looked back. He graduated from the online Registered Nurse to Bachelor of Science in Nursing program offered by the University of Rhode Island in December 2017 and plans to enroll in a Master of Nursing Family Nurse Practitioner program.

"When I went into nursing, I loved it," he said. "I started out in long-term care, and I really enjoyed working with the seniors and the older population. I was very comfortable with the age group and the demographic. I worked in an Alzheimer's unit, so I got some Alzheimer's and dementia certification."

Taylor became an LPN, then an RN as he earned an Associate of Nursing degree from Community College of Rhode Island. In 2014, he became director of nursing for Comprehensive Community Action Program, a community health center in Cranston, Rhode Island.

"I had years of management experience, and then I had some nursing under my belt," Taylor said. "I love what I do now. I still have a lot of patient contact, but it's very different. We work with an underserved population.

"This job met my family needs a little bit better since it is pretty much 9-to-5, and we don't work weekends. It works with the life I always knew prior to becoming a nurse. That's how I landed here. It really has been a nice fit for me. It is a natural role." 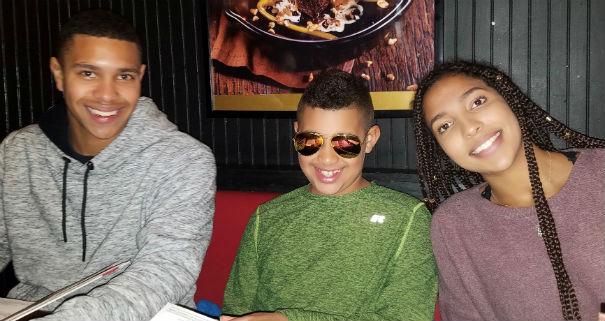 The flexibility of the online format worked extremely well for Taylor, who has a 9-year-old son, Ashton, with his partner, Robert Rocchio Jr.

"The online classes are fantastic," Taylor said. "Sometimes I would take my laptop out to my car with my Wi-Fi, and I would see if I could get online and do some work or do some reading on my lunch break.

"At night, my son would go to bed around 8:30. Once he went to bed, everybody was kind of doing their own thing. I would do my schoolwork from 8:30 to about 11, four nights a week. It worked out well for me."

Taylor also enjoyed all of the time he saved by not driving back and forth for an on-campus program.

"The commute time alone was a half-hour to an hour each way," he said. "That was time I didn't have to leave my house, and I could get two hours of work done."

"I would take out my laptop, take out some materials and sit at the counter," he said. "Ashton would sit next to me, open his Chromebook and start working on his math program or his reading program. I could see him looking over at me a little bit. I'd say, 'How's your homework going, buddy?' We'd kind of go back and forth, but he really got a kick out of getting to do that with me."

That experience led to an unexpected compliment from Taylor's son the night before graduation.

"I was putting him to bed and he said, 'Dad, I want to let you know how proud I am of you,'" he said. "I thought, 'Wow, that's really something that a 9-year-old recognizes that.'"

Taylor took away a lot of valuable insight into his second career — especially since he is so new to the nursing profession.

"There was one course called (NUR 443) Community/Public Health Nursing," he said. "I work in community health, so that was something I felt like, 'Gee, why can't I get that waived?' There were aspects of the course that I learned that were neat things to know, and there were definitely things I was able to apply to my job immediately. There was plenty of information I came to work and shared with other people. I really think it was a very impactful program."

"We used an online tool that was a virtual patient," he said. "It was a really neat way to interact with a patient and complete a physical assessment."

He also got more than he bargained for in some of the general education courses, like HIS 146: Women in the United States, 1890-Present.

"I felt that I probably knew a lot of that and what happened through history in the 1950s and 1960s and with women's suffrage," Taylor said. "Quite honestly, there was so much that I had no idea about. I learned so much new information in many of the general education classes.

"When I started, I thought, 'Why do you need something like this? Why do you need all of these other classes?' Now, I understand. Now that I've done it all, it makes sense to me. It was really well-rounded."

The graduation ceremony was extra special for Taylor because it included a coworker he started the RN to BS in Nursing program with and a pair of his professors graduating with their doctoral degrees.

"Because it was a winter graduation, it was really just the nursing school that graduated," he said. "So, it wasn't one of those four- or five-hour graduations. It was about an hour-and-a-half. It was nice and really intimate. It worked out well."

Taylor has two other children, Andrew (18) and Jordan (16). Andrew is a first-year student at URI who is currently planning to focus on engineering, and Jordan plans to follow suit after high school.

"Everyone — my family, my partner, my kids, my coworkers — was so supportive all the way through," he said. "My family always encouraged me. They said, 'Go get your schoolwork done.' They were always willing to accommodate my schedule, so I really am grateful for the sacrifice they made with time. It did affect all of us. Having support really meant a lot."

Taylor believes the online RN to BS in Nursing program is the way to go for any nurse, whether nursing is their first, second or even third career.

"I feel like you put your nose down and do it because the time is going to go by anyway," he said. "Isn't it better that in two years or less you come out the other end with a degree in your pocket rather than nothing? It's definitely a doable program.

"Since we started two years ago, there were seven other nurses we work with who enrolled in the program, so they are all in different phases of the online RN to BS in Nursing program. Some of them have two jobs, they have kids, and they're all happy they are doing it."