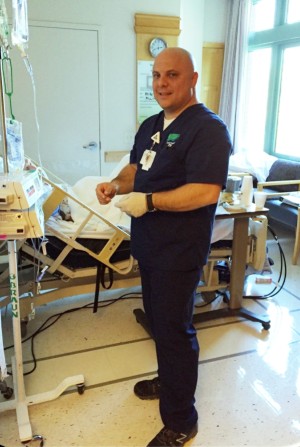 Michael Montefusco found a new career the day his son was born.

Shortly after Montefusco lost his construction job in demolition during the 2008 financial crisis, he became a first-time father when his wife, Irene, gave birth to their son, Trevor.

"When we went to the hospital, the baby and my wife were in a little bit of jeopardy," he said. "The baby was presenting incorrectly, so he was getting crushed in the birth canal. Just by watching monitors, doing assessments on my wife and looking at little squiggly lines printed on a piece of paper, the nurse on duty knew immediately that my wife needed a Caesarean section instead of a natural birth. My wife and my baby were saved because of this nurse's actions."

The experience inspired Montefusco to pursue a nursing career.

"I told my wife, 'You know, that is the coolest job ever. It's like having a super power. I need to do that.' She said, 'You want to go become a nurse? You want to deliver babies?' I said, 'Well, maybe not deliver babies, but I think that's really cool. I'm out of work. I'm going to go apply to the local community college and sign up for just one class and see how I do,'" he said.

Nine years later, Montefusco is a registered nurse on the cardiac telemetry unit at Griffin Hospital in Derby, Connecticut. He also graduated from URI's online Registered Nurse to Bachelor of Science in Nursing program in June 2018.

Four years earlier, Montefusco earned an Associate Degree in Nursing with a 4.0 GPA at Gateway Community College in New Haven, Connecticut. He is a first-generation college graduate.

"Leaving construction and going back to school at 35 years old was all predicated on that moment when my son and my wife were on the brink during childbirth," he said. "The way I saw that nurse save both of their lives transformed my life forever." 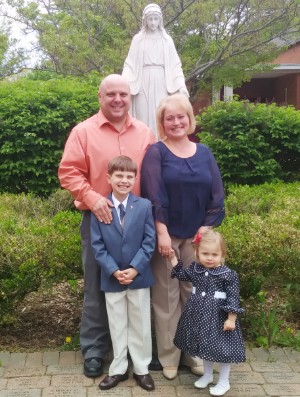 Michael with his wife, Irene, and their children, Trevor and Johanna

As Montefusco earned an associate degree and embarked on his nursing practice, he knew earning a BSN was in the cards.

"There's always an impetus to continue your education when you're working in healthcare," he said. "When I went for my associate degree, it was around the time the Institute of Medicine came out with the report recommending that 80 percent of registered nurses be BSN-prepared by the year 2020.

"I always had it in the back of my mind that in order for me to stay current, to stay up to recommendations, to pursue other ventures in nursing than just staff nursing, it was imperative that I go back to school for a bachelor's degree," he said.

Before Montefusco enrolled at URI in October 2017, he and his wife brought home a sister, Johanna (4), for Trevor (10). With two young children and a full-time job, Montefusco needed the online format at URI to squeeze school into his busy schedule.

"The online program allowed me to have that flexibility, because I wasn't tied to a campus where I would have to be two or three hours a couple of times a week and be away from home," he said. "My family is super supportive. Instead of going out and being able to do a lot of the extra things with the kids, I have had to stay in and study or be up late after I put them to bed."

Although the program was online, Montefusco wanted the university to be close to his home in New Haven.

"I knew that if I had any kind of issue where I needed to meet someone in person at the school, it wasn't going to require a plane ride," he said. "Plus, my family has a vacation home in Westerly, so Rhode Island has always been part of my life."

Because Montefusco is still relatively new to the nursing profession, the real-world knowledge and aspects of the curriculum were especially beneficial. Of all the courses in the curriculum he found NUR 447: Adult Health and Assessment and BPS 333: Nursing Pharmacology to be most applicable to his career.

"The assessment course was interactive and a really cool course," he said. "You could go online and interact with and perform a physical assessment on a patient, all through the computer. You could ask questions, and the patient would respond to you. Then, you were able to use a stethoscope or a pen light to look into their eyes. It was one of the harder classes, but it was one of my favorites because it taught me a lot."

Since Montefusco changed careers, he has been fascinated with how drugs work and interact with different systems of the body, making pharmacology one of his favorite courses.

"Being a nurse, I'm a little bit of a drug geek," he said. "Pharmacology has always been an interest of mine. Actually, I got my lowest grade in that class, an A-minus. I can't believe it, but it was so challenging and, maybe because I was so into it, I was trying too hard that I got a 91 in the class. It dropped my GPA from a 4.0 to a 3.9."

Still, he sees the value of those two courses regularly at work.

"The education at the University of Rhode Island accentuated, heightened and developed my practice in ways I can't even describe," Montefusco said. "I've had physicians I work with approach me or my management team saying they want me to take care of certain patients because of the way I do physical assessments. That's all based on the advanced assessments course I took at URI.

Now that Montefusco has a bachelor's degree and a successful nursing practice, he has no intention of slowing down. In fact, he plans on bringing his current and former careers together.

"I want to pursue my master's degree in administration in the next five to 10 years," he said. "Instead of being by the bedside, caring for my patients, I'd like to be part of a team that designs hospitals so we take better care of our patients. That's probably from my construction background.

"Hospitals don't have to be white, stainless steel and sterile. They can be a little homier and more relaxing. In administration, I think I could execute some of that change in the future."

Montefusco is glad he chose URI for his return to higher education. Just like the moment that sparked his decision to pursue nursing, he was in the right place at the right time.

"If you're ready to make the commitment, the RN to BS in Nursing program at URI is well worth it," he said. "You can't go half-hearted into it. Whatever you put into it is what you get out of it. For me, especially, whatever I do, I throw myself into it.

"My advice is, 'Hold on. You're going to be busy, but in the end, your practice is going to be changed forever.' This degree has helped me so much, so soon. I had job interviews after graduating. It helped open up different avenues — tremendously.