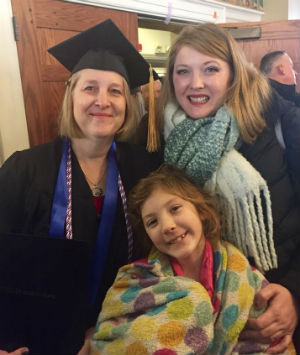 Ellyn at URI graduation with her daughter Mandi and granddaughter Lilly

Talk about a hive of activity.

While Ellyn Schlageter was a mother, grandmother, caretaker, full-time wound care nurse and beekeeper, she earned a Registered Nurse to Bachelor of Science in Nursing degree online at the University of Rhode Island. Schlageter graduated in December 2017.

"I could not have done it any other way," she said. "I didn't think I would be disciplined enough in an online program. I thought, 'I need to be in a classroom with a chalkboard and have a teacher there to tell me what to do,' but it was really good. I felt like I was part of a classroom with the forums because you do get to know your classmates and you do interact with each other. I didn't think I would like it as much as I did."

Schlageter returned to school after her employer, Visiting Nurse Association of Southern Connecticut, offered her a new position as a wound care-certified registered nurse once she completed that certification.

"I told the other wound care nurse that I was really interested in taking a wound care certification class, and she said, 'You should check. We have scholarship money sometimes. Maybe you could get some assistance,'" she said. "So, not only did I get assistance, but I became the wound care nurse's sidekick.

"It's kind of a middle-management thing because I was no longer part of the union. Technically, the managers are supposed to have a BSN. I did it mainly because I felt like VNA invested in me, so I should invest in myself. Then, I loved school."

The wound-care position also led Schlageter to a new beekeeping hobby, which she has done for two years.

"Wound nursing was a big part of it," she said. "We use honey from Australia and New Zealand for wound care. I also love to garden, so taking care of the bees helps take care of my garden."

After a period of adjustment, Schlageter fit schoolwork in with her busy life, which includes spending time with her two grandchildren who live next door to her. She also has three grown kids.

"The first class was eye-opening," she said. "When the instructor sent that first email and said, 'This is how much time you should expect to spend -- 15 to 20 hours a week.' I said, 'I don't have 15 to 20 hours a week. What the heck?' But, you figure it out. Because it's online, you can do it whenever you can, most of the time."

One course Schlageter initially did not want to take, NUR 443: Community/Public Health Nursing, ended up being one of her favorites.

"I said, 'I work in community health, so I don't need this class,'" she said. "I tried to tell them, 'Let me take Nutrition,' but they're very rigid about which classes you need to take. I'm really glad they were.

Schlageter, who is originally from Berkley, Massachusetts, also enjoyed the first course in the curriculum, NUR 247: Introduction to Professional Nursing Practice.

"It gave you a bigger perspective on nursing, in general," she said. "I hadn't been to school in 20 years, so it brought me up to date to a point of looking at nursing as more than just taking care of your patients and taking care of the world."

URI had several qualities Schlageter wanted for her return to higher education, including reputation and proximity.

"It was close to my house," she said. "One of my thoughts was, 'If there's a problem, I can drive there.' I knew that URI is a good school with a well-known nursing program. When I told my supervisor I was going back to school and where I was going, she said, 'Oh, good. That's a good school.'

"My husband said, 'What do you need to do that for?' I said, 'Well, they are pushing all of the nurses to do this. If for some reason I lost my job, any potential new employer is going to want me to have a BSN. I might as well do it now. I also get tuition assistance where I work to help me pay for it.'"

"I took a class called Career Decision Making for Women," she said. "We did aptitude tests and different things in the class and that told me that nursing was one of my interests. I had never really thought about it before.

"My grandmother was a nurse and my aunt was a nurse, but I hadn't really said, 'Oh, I want to grow up and be a nurse.' After taking that class, the nursing program there was taking new students in January, which they didn't usually do. I started that program."

Schlageter completed an Associate of Nursing program at Community College of Rhode Island in 1997. She has worked for VNA since 2005, but the URI online RN to BS in Nursing program still taught her plenty to help her become an even better nurse.

"I have taken something away from every single class, and I have been a nurse for 20 years," she said. "I found myself paying more attention to my assessments and listening to lungs in more places than I was before and noticing more. That's what going to school does -- it wakes you up."

At Home in a Colony

Now that Schlageter has graduated, she has her sights set on opening a nonprofit assisted-living nursing facility.

"My faith is Christadelphian," she explained. "In England and Australia, they have homes for people in our faith. There are eight in England -- I've gone to visit two of them. There are four or five in Australia. I'm going to see those. I want to make one here in New England for the elderly in my faith so they would have a place to retire to and be taken care of with basic needs."

Schlageter hopes to finalize nonprofit status and open the facility this year. She cared for her father, who passed away, and still cares for her 89-year-old mother, who has dementia and lives with her.

"It started in the last few years," she said. "Taking care of both of my parents was a big part of it, along with other people talking to me about taking care of their elderly parents. Once I went to England and saw the facilities, which are called residential care facilities there, I said, 'Oh, I can do this.'"

Wherever her journey takes her, Schlageter is confident that earning a BSN will only help guide her.

"If you get a new job and you don't have a BSN, they tell you that you have two or three years to get it," she said. "Pretty much now in all of the associate nursing programs, they are telling the graduates, 'Start now. Keep going for your BSN.' It's not as bad as you think. Just keep your head down and keep going."