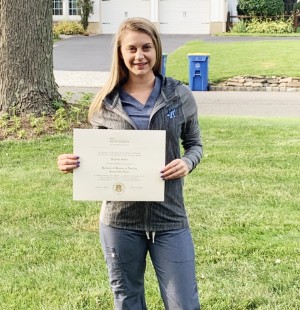 Danielle shows off her Bachelor of Science in Nursing degree

When Danielle Cerbo initially enrolled at the University of Rhode Island six years ago, she majored in textile merchandising and design and French language in hopes of forging a career as a buyer.

But a funny thing happened on the way to the runway.

"I made a little bit of a switch," she said. "I joined URI's Emergency Medical Services. I met a lot of people through that and did the whole training program. When I came home to New Jersey for the summer, I decided to get my Emergency Medical Technician license so I could keep going. I loved it. Now, I am super passionate about it."

So much so that Cerbo returned to URI and graduated from the Registered Nurse to Bachelor of Science in Nursing online program in May 2019. She now works as a registered nurse on sister units of neurology and pulmonary med-surg at Morristown Medical Center in her hometown.

"My hospital is a Magnet Hospital, so I signed a contract when I was hired saying I would get my bachelor's degree within five years," Cerbo said. "When I decided I wanted to pursue nursing, I moved back home to get it done a little quicker."

Cerbo graduated with an Associate of Applied Sciences in Nursing from Raritan Valley Community College shortly before returning to URI in September 2018.

"I had planned to get a bachelor's degree all along," she said. "I chose to go back to URI because I had already earned a lot of credits. The program accepted a lot of them so I was able to get it done quicker. I believe the RN to BS program prepared me well." 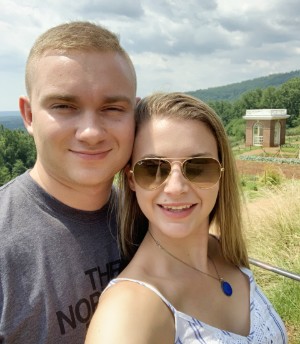 Danielle and her boyfriend, Shane

After graduating from Bernards High School, Cerbo set out for college in Kingston primarily because URI was one of the only schools that had the program she wanted to major in to pursue a career as a fashion buyer.

"I also went there because of the campus," she said. "I was very particular about what kind of campus I wanted."

Although Cerbo did not get to experience campus life during her return to URI, she found that the flexibility of the online format allowed her to maintain her full-time job and pick up where she left off. In fact, she finished the program in less than a year with the combination of the accelerated format and her previous credits.

"I took two classes every seven weeks," Cerbo said. "I work nights, so that worked fairly well for me because I could do my homework during the day. The courses in the program were set up where they were staggered and different things were due on different days of the week, so I didn't struggle to get everything that was due in on time."

NUR 443: Community/Public Health Nursing was her favorite course in the online RN to BS in Nursing curriculum.

"That course was very relevant," Cerbo said. "It had something to do with what I was doing at work. With some of the other courses, you are getting the continuation of your associate degree. I was doing some of the stuff on a daily basis, but it was all certainly applicable."

Although Cerbo did not walk, she attended the commencement ceremony at URI to celebrate her accomplishment with her classmates and professors.

"I enjoyed it," she said. "My family and friends were excited and supportive about me going back to school. It took me a little bit longer to finish than expected."

Now that Cerbo has a bachelor's degree, she looks forward to working hard and eventually returning to college to further her higher education after a positive experience at URI.

"I would love to pursue a Doctor of Nursing Practice," she said. "I need to have a little bit of experience to do that. The plan is to get some experience and go back in the next five years. I want to eventually become a nurse practitioner and a provider."

Cerbo, who enjoys going to the beach and traveling, is glad the online program led her back to URI to come full circle by completing a bachelor's degree program where it all started. She recently celebrated some more with a trip to Disney World.

"I would tell anybody considering the RN to BS online program to maybe start with one class at a time," she said. "I jumped right in because I wanted to get it done quicker. Not everyone's work schedule is the same.

"I would say start slow, work your way into it and get used to being a new nurse or wherever you are in your life. Don't assume it's going to be easy because it wasn't. I absolutely got good value out of the program. It worked out really well for me."

Learn more about the URI online RN to BS program.