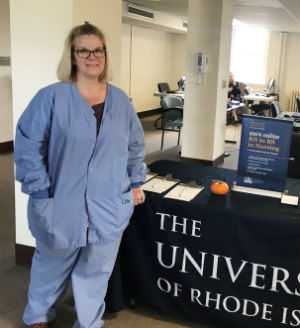 After a 25-year hiatus from college, April Gomes was more than a little apprehensive when she enrolled in the online Registered Nurse to Bachelor of Science in Nursing program at the University of Rhode Island.

"I work for a Magnet hospital," she said. "They didn't necessarily force me to go back to school, but they highly encouraged it. I did it because of the risk of not being able to support my family. If I were to lose my job, I wouldn't be able to find another job without a BSN."

Gomes, who works in the surgical services department at Newport Hospital, completed her degree in July 2019 and had a great experience throughout her 24 months in the program. She had some help from her colleagues along the way.

"The online program at URI was perfect," she said. "Several other nurses I work with and I all entered the program at the same time, supported each other and took a lot of classes together so it wasn't so daunting. I could always bounce things off of someone."

Returning to college was especially scary for Gomes because she is a single mother to three children — Devon (20), Emma (16) and Noah (15).

"They were all very supportive," she said. "They knew my schedule and when things were due. For example, Thursdays and Sundays were my big days. They would come in and say, 'Mom, are you doing homework? Do you need us to be quiet?' They were good about it."

The flexibility and consistency of the online format contributed greatly to Gomes' success in the RN to BS in Nursing program.

"The work in each class was pretty much identical," she said. "You had certain things due on certain days. It seemed like every class maintained that, so I was able to work my home life and my work life around that schedule. The fact that it stayed steady throughout the whole program helped me out quite a bit."

After graduating from high school, Gomes was not sure what she wanted to do for a career. Her mother encouraged her to enroll in college, which she did as an elementary education major.

"I hated it and dropped out," she said. "My mom told me she wouldn't pay for me to go back and that I had to find a job. I found one as a certified nursing assistant in a nursing home at night. I got to go to the beach during the day and work at night, but I found that was really what I wanted to do and it was a passion."

Gomes put herself through school and graduated with an Associate Degree in Nursing from Bristol Community College in Fall River, Massachusetts, in 1994.

"I entered the nursing profession and never regretted it for one minute," she said. "I have had a little taste of the management side, and it really wasn't for me. I enjoy the patient connection and never wanted to leave bedside nursing."

After getting married and starting a family, Gomes thought earning a bachelor's degree was permanently on the back burner.

"It crossed my mind several times, but school was never something that I could fit into my schedule," she said. "At that point, you had to go to campuses for classes in the RN to BSN programs. I put it off and decided I wasn't going to pursue it. As I got older, the fear of going back to school became greater."

However, as Gomes started the online RN to BS in Nursing program at URI, that fear subsided when she devised a study regimen that fit her schedule.

"I am a procrastinator," she said. "But because I am so busy with three kids and a full-time job with very limited extra time to myself, I had to stick to that schedule in order to get things done. I didn't have a choice. The program definitely stopped me from procrastinating."

Although Gomes enjoyed all of the courses in the program, NUR 444: Community/Public Health Nursing Practicum was especially meaningful.

"I had to go out and do community service for the course," she said. "My youngest child had just been diagnosed with Central Auditory Processing Disorder (CAPD), a learning disability. I was able to incorporate that [into the practicum] by going to the elementary school he attended and working with the teachers to help him.

"Now, he's in high school. I have been dealing with this since he was in kindergarten. If teachers were able to identify the symptoms and things he was presenting, he might have been diagnosed earlier. It helped me learn more about his diagnosis, as well. It worked out for both of us."

In addition to the support of friends, family and co-workers, the help and encouragement Gomes received from the faculty at URI helped her stay the course.

"They are willing to work with you and are open with communication, which made the program a lot more doable than I first anticipated," she said. "I thought it was going to be much more difficult coming in after 25 years out of school. It was definitely worth it, and I would recommend the program to anyone."

Gomes wasn't able to attend the commencement ceremony at URI, but she has seen the influence her return to college has had on her children.

"My kids wanted me to go to the ceremony to get my diploma, but my work schedule prevented it," she said. "My daughter is looking into going into nursing school, as well. My oldest son considered it for a while but changed his mind. He is still thinking healthcare."

Looking back, Gomes is happy she took the leap of faith and returned to college. She knows she is better for the experience.

"At the beginning, I did it for financial stability and to make sure I always had a job and could retire," she said. "Now that I am finished, [I realize] it went by very quickly. The first time around in nursing school, my GPA was less than a 3.0. It was a 3.8 this time.

"With a full-time job and three kids, I am so proud of what I was able to accomplish in the program. I don't regret it one bit. Even if I was a little unsure of it at the beginning, I am happy that I chose to go back."